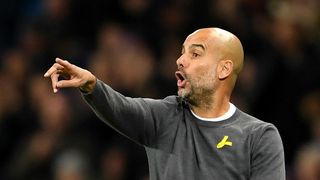 Pep Guardiola warned against the pursuit of perfection and insisted Manchester City will always have work to do to maintain squad harmony.

Key trio Kevin De Bruyne, Fernandinho and Nicolas Otamendi all committed to new deals at the Etihad Stadium this month, with City flying high at the Premier League summit.

A quadruple is still on the cards for Guardiola following the club's midweek progression to the EFL Cup final, but the City boss refuted the notion he was closing in on having the perfect squad.

"Otamendi, Fernandinho and De Bruyne have all extended their contracts and we are so, so happy that they are with us for the future. It is the best news of the past weeks," he said.

GET EXCITED! has today signed a new contract at the Club!INFO  January 22, 2018

"[But] you are never near [perfection]. If you believe you are okay for the next three years it is a mistake.

"The players who aren't playing regularly accept their positions, but in future maybe next season they won't accept and they want to leave.

"You always have to solve the situation year by year."

Guardiola takes his side to Cardiff City in the FA Cup on Sunday.