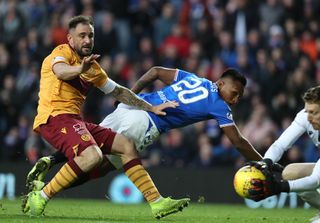 The Steelmen secured their first win in nine games with an emphatic display in a 4-1 triumph at Fir Park.

Motherwell extended their lead in third place in the Ladbrokes Premiership to three points but Hartley admits they will need to continue their midweek form against Hearts at Tynecastle on Saturday.

The defender said: “It feels like a team that has clicked again and got back into the gear we showed before Christmas. We were playing with a good rhythm and were controlling a lot of games.

“We hit a little bit of a blip, I don’t know if it was players coming in and it was just games in quick succession and it took its toll a little bit.

“But we had a bit of a break and it shows what a fresh Motherwell team can do.

“We have played well in spells over the last five or six games but a complete performance like that has been a long time coming.”

Hartley lost Liam Fontaine at a third-minute corner and the County defender volleyed home but the centre-back soon set up Motherwell’s equaliser.

“We didn’t start well and it showed good character from the team,” he said. “We have gone ahead in recent games and ended up losing the three points so it was important that when we did concede so early we reacted in the right way, and the fans were fantastic.

“We stuck to our fundamental principles, didn’t shy away from getting on the ball and thoroughly deserved our victory.

“It’s not like we have been getting destroyed by teams and it was panic stations, it was just that the rub of the green was going the other way in recent games.

“We had to make sure we were out of sight and didn’t make it a close game and we did that very well and controlled the game and were patient.”

Hearts remain bottom but they have looked rejuvenated in the past week with victories over Rangers and Hibernian.

“It’s a challenging time to play them,” Hartley said. “Hearts are always a good team, they have some quality players. We have played them twice (in the league) and beat them twice and hopefully we can get another three points.

“But they had a good result against Hibs, got a convincing victory at Easter Road, so the boys might have turned a new page at their end so we have got to bring our best game.”