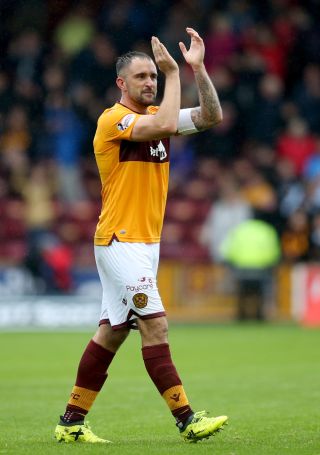 Peter Hartley insists he would never assume he was guaranteed selection for Motherwell just because he is the club captain.

The centre-back paid the price for Stephen Robinson’s switch from a back three to a flat back four, with the pace of Charles Dunne utilised on the left side of the central defence.

Hartley also faces a fight for his place this year with summer signing Declan Gallagher lining up alongside Dunne in the first two games.

But Robinson hailed Hartley’s exemplary attitude during his spell on the bench and the Englishman has vowed to continue fighting for his place ahead of Saturday’s Ladbrokes Premiership opener at Livingston.

“Whether I make the bench or I’m a starter, first and foremost it starts with your performances in training.

“I have just got to keep working the boys in front of me as hard as I can. Competition for places breeds success.

“I just do what I do, I am 31 years old now and I know my own body, I know what I need to do to get match fit. I have just tried to improve and get better every day really.”