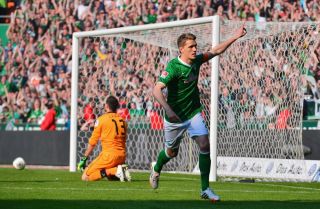 The 25-year-old forward, who joined Werder Bremen on a permanent basis in May 2013, scored seven Bundesliga goals last season in 19 starts and a further nine substitute appearances.

Frankfurt are looking to replace loan striker Joselu, who has completed a move to Hannover 96 ahead of the 2014/15 campaign.

Petersen helped Bremen to 12th in the league last term, one position ahead of Frankfurt, but continues to be linked with a switch to the Commerzbank-Arena.

However, Petersen told Bild: "I know nothing about potential interest in my services from Eintracht Frankfurt.

He added: "I am under contract from Werder Bremen, and my biggest ambition is to follow up my career at the Weserstadion."

Bremen general manager Thomas Eichin was also dismissive of the speculation, adding: "Nils is part of our plans for the new season."