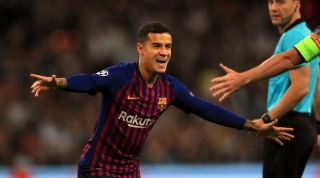 Arsenal are exploring the possibility of making a loan offer for Barcelona's Philippe Coutinho, report The Sun.

The Brazil international has struggled to replicate his Liverpool form at the Camp Nou, and Barcelona are thought to be open to offers this summer.

The La Liga champions want £110m to sell Coutinho permanently, a price tag which puts him out of the reach of most European clubs.

However, Barcelona would reportedly settle for £27m were another side to take him on loan.

Arsenal have now emerged as surprise contenders to sign the attacking midfielder, who swapped Merseyside for Catalonia in January 2018.

Gunners Head of Football Raul Sanllehi plans to open discussions with the Barcelona hierarchy on Sunday.