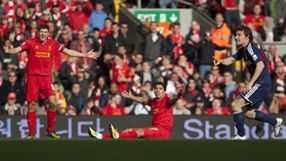 In an interview with Fox Sports Latin America, the Uruguayan said he often made headlines because his name sold newspapers.

Liverpool's top scorer, who has netted 15 Premier League goals this season - two behind the league's leading marksman Robin van Persie - owned up to diving against Stoke City at Anfield on October 7.

"I think that on the pitch you have reactions where you ask yourself "What the hell did I do?". I was criticised for diving for a ball against Stoke and I did throw myself there," he said.

"I'll be sincere, I did dive there because we were anxious against Stoke at home and wanted to come up with something."

Liverpool manager Brendan Rodgers was unimpressed with Suarez's confession. He described the admission as "unacceptable" and told a news conference the Uruguayan forward would be "dealt with internally".

Suarez has angered opposition managers, players and fans alike who feel he goes to ground too easily. Swansea City defender Ashley Williams said last year he "dived more than any other player I've played against".

The 25-year-old came under fire again earlier this month when he netted Liverpool's second goal after a clear handball in the FA Cup match against non-league Mansfield Town.

Rodgers said Suarez had unintentionally handled but the player was greeted by "cheat" headlines in the British media the following day.

"I realise that Suarez sells, because the other day a ball hit my hand unintentionally and I didn't even feel like scoring the goal and I hit [the ball] just to hit it, but then, because I kissed my wrist, the criticism started," he said.

"If Suarez sells then they're going to say that in the dressing room [for example] Suarez spoke in secret in front of Steven Gerrard. They'll invent anything. [The media] should dedicate themselves to talking about football and not about each player's attitude."

Suarez has been no stranger to controversy since joining Liverpool from Ajax Amsterdam in January 2011.

He served an eight-match ban for racially abusing Manchester United's Patrice Evra and later angered United manager Sir Alex Ferguson by failing to shake the French defender's hand before their league match in February last year, the first time the players had met since the ban.

Ferguson branded Suarez a "disgrace to Liverpool" but the player said he paid no attention to what others said about him.

"If I heeded what people say off the pitch, I couldn't be where I am nor would I be able to play football," he said.

Suarez said he and other foreign players were treated differently in the British media.

"Foreigners, and even more so South Americans, are treated differently from home [players]. They are [different] cultures... different ways of living.

"What we have to do is play football, do what we know how to do, what we always wanted, what we suffered and fought to be here [in England] and not listen to the stupidities some people say."