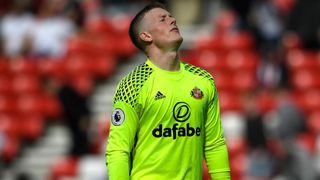 David Moyes has urged in-demand goalkeeper Jordan Pickford not to leave Sunderland if it means he ends up on the substitutes' bench at a top club.

Despite Sunderland's relegation from the Premier League this season, the 23-year-old has impressed with his performances, including a starring role in Saturday's 2-0 victory away to Hull City.

The clubs linked with a big-money move for Pickford include Arsenal, Everton, Liverpool, Manchester City, Manchester United and West Ham.

But Moyes warned Pickford, who is under contract at the Stadium of Light until 2020, to consider his own development when deciding his future.

"At the moment, I really wouldn't know what the odds are on him staying - obviously it is up to the club," Moyes told reporters.

"But if Jordan was to go elsewhere and not be the number one, that wouldn't be good for him because that would affect his progress.

"I think that [Pickford being a Sunderland fan] would be a telling factor if the alternative was to go and sit on the bench somewhere else.

"If I was Jordan I wouldn't do that, I would want to be playing regularly, but again Sunderland hold his contract and Jordan can't go anywhere unless we decide to let it happen.

"You can see what he does for us with the saves he makes. He has been outstanding from day one. The saves he made against Hull, they weren't even special, he makes them all the time."

Pickford is yet to win his first England cap, but earned his first senior squad call-up last October.