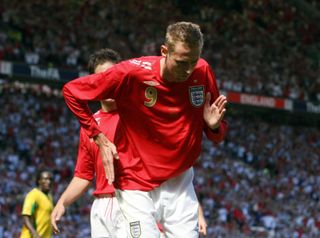 England’s Peter Crouch celebrates his second goal with a robot celebration during a 6-0 friendly win over Jamaica on this day (June 3) in 2006.

Crouch gained cult hero status as he performed the dance during his hat-trick performance in England’s final World Cup warm-up at Old Trafford.

The then Liverpool striker transformed perceptions of him among the England support – he had been booed on to the same pitch eight months earlier when coming off the bench in a qualifier.

We’re all missing the pod so until the guys come #backstronger here’s a classic pod clip where @petercrouch talks about the first appearance of ‘The Robot’ 🤖…enjoy! #ThatPeterCrouchPodcast#passthepod@Chris_Starkpic.twitter.com/sV9ntvLHi9— That Peter Crouch Podcast (@PeterCrouchPod) May 29, 2020

The robot emerged when he was fooling about on the dance floor during a party hosted by David Beckham which was filmed for TV. Days later he agreed to celebrate in the same way if he scored against Hungary in a friendly – and lived up to his promise when he came off the bench to net.

The next match was against Jamaica and he weighed in with a treble to keep the dance in the public eye.

The celebration captured the public imagination in the build-up to the action starting in Germany and the makers of Subbuteo rushed to release a figure of the forward performing the dance in time for the World Cup kick-off.

Crouch started in England’s first game against Paraguay and scored in their second victory against Trinidad and Tobago before Sven Goran-Eriksson’s men lost on penalties to Portugal in the quarter-finals.

Crouch’s iconic celebration was not seen again until he netted his 100th Premier League goal, for Stoke against Everton at the age of 36 in February 2017.

He said after the game: “I was under so much pressure to pull out the robot – to be honest, it was a little bit rusty! I think I’ll put that one away now!”