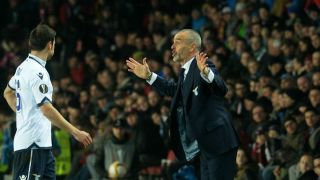 Stefano Pioli says he did not hear any racist chants during Lazio's 1-1 Europa League draw with Sparta Prague at the Generali Arena on Thursday.

UEFA opened disciplinary proceedings against the teams on Friday, with Lazio facing a charge of racist behaviour after play was paused midway through the first half when Sparta defender Costa Nhamoinesu was subjected to abuse from the away support.

However, Lazio coach Pioli claims the only chants he heard were those insulting Italians.

Pioli also suggested a ban on all home fans entering the Stadio Olimpico for a match would be an unjust punishment.

"I tried to let the referee understand in my broken English that I didn't hear any racist chants," he said.

"I did hear chants insulting Italians, those were pretty clear, but I am not trying to justify anything.

"I just believe it is easier to punish the few transgressors than it is an entire set of fans. These situations should be avoided and are bad for sport, but it's still only a minority doing it."