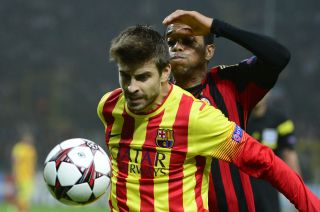 The Spain international was a doubt ahead of the stellar fixture with Carlo Ancelotti's men, after sustaining a thigh strain in Tuesday's 1-1 draw at Milan in the UEFA Champions League.

But he took part in training with the rest of the team at Camp Nou on Friday, and manager Gerardo Martino confirmed his availability for Saturday's showdown.

"Pique is in the squad and he is able to play tomorrow," Martino commented.

Barcelona will have home advantage for the match, and lead La Liga with eight wins and one draw from their opening nine league games.

But Martino refused to accept his side would head into the match as favourites, and warned his charges to be wary of Madrid's sharpness on the counter-attack.

"I don't think the favourite is based on recent games," he continued. "There are important players in both sides.

"I don't think in Clasicos there is one team who starts as favourites. We will see who is favourite over the 90 minutes.

"They are going to try and prevent us from getting on the ball. Real can play on the counter-attack and we want to finish off every attacking move we have. We have to get back as best we can to ensure they don't have goalscoring chances.

"They have (Cristiano) Ronaldo, (Gareth) Bale, (Karim) Benzema, (Angel) Di Maria, they can be dangerous, but we have to be oursleves and take certain risks."