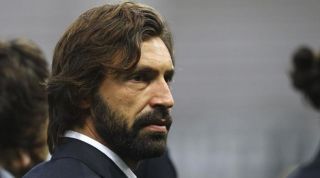 Pirlo, now of Juventus, was on the verge of reuniting with Carlo Ancelotti at Stamford Bridge after the Italian manager called time on his eight-year spell in charge of Milan at the end of the 2008-09 Serie A season.

In extracts from his autobiography titled I Think Therefore I Play, Pirlo, who eventually joined Juve in 2011, had begun discussing personal terms before Berlusconi ended his hopes of a switch to the Premier League.

"Ancelotti was my motivation for agreeing to head to London. But, in the meantime, Berlusconi had pulled out a second piece of paper," the 34-year-old said.

"'Listen, Andrea, you just can't do this, damn it. You're the symbol of Milan, a standard bearer for this team, and we've already sold Kaka.'

"'You can't jump ship as well. It'd be a terrible blow, to our image as much as anything. We can't have everyone leaving.'

"Ancelotti and I spoke a fair bit on the phone. He wanted to bring me to London at all costs, and cost was indeed the last hurdle still to be overcome. Insurmountable, as it transpired.

"Milan wanted too much cash, and they were also pushing for Branislav Ivanovic to be included in the deal. Chelsea hadn't the slightest intention of letting the defender go.

"'Mr President, I really like all this talk of being a standard bearer. But my contract here is about to run out, and those guys are offering me four years.'

"'Where's the problem, Andrea? You can sort all that out with (Adriano) Galliani, can't you? Take it as read.'

"No sooner were the words out of his mouth than he shot out of the room to tell the media: 'Andrea Pirlo is not for sale. He's staying with Milan and he'll finish his career right here'."