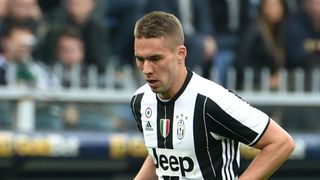 Marko Pjaca needs a loan move away from Juventus to boost his playing time ahead of the 2018 World Cup, his agent Marko Naletilic has suggested.

Croatia international Pjaca made his comeback from eight months out with a cruciate ligament injury with the youth team in November, but is yet to feature for the senior side.

The 22-year-old has been heavily linked with an exit from Allianz Stadium, but Naletilic denied he will depart permanently amid reports he could be included as part of a deal that would see Emre Can arrive from Liverpool.

Allegri has hinted at a willingness to let Pjaca go out on loan, and the winger's representative insists something needs to change with the World Cup fast approaching.

"I receive calls from England, Germany, Italy, France but that is where conversation ends because Juventus will not even listen to offers," Naletilic told 24sata.

"We are aware it will be hard to get minutes and we will decide what to do shortly.

"It could be a four-month loan or to stay in Juventus, but no permanent transfer is an option.

"He needs minutes because of [the] World Cup. Primavera games helped him psychologically."