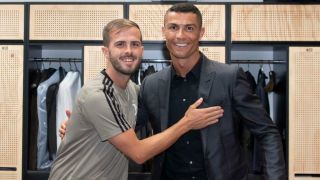 Miralem Pjanic described Cristiano Ronaldo's signing as a "huge coup" but the Juventus midfielder refused to confirm his future with the Italian champions amid links with Chelsea.

The 33-year-old – Madrid's all-time leading goalscorer – signed a four-year contract with the Serie A giants.

However, Pjanic's future in Turin is far from certain as new Chelsea boss Maurizio Sarri reportedly tries to lure the Bosnia-Herzegovina international to Stamford Bridge.

According to speculation, Chelsea have been discussing the possibility of signing Juve pair Daniele Rugani and Gonzalo Higuain.

Pjanic – who arrived from Roma in 2016 – has now emerged as a possible target for Chelsea as Sarri seeks another central midfielder in London.

As he left a restaurant on Wednesday, Pjanic was quizzed on his future with Juve and the 28-year-old replied, "have a good evening" before driving away in his car.

Juve have already signed Ronaldo, Joao Cancelo, Emre Can and Mattia Perin, while Manchester United star Paul Pogba has been linked with a return to the club.