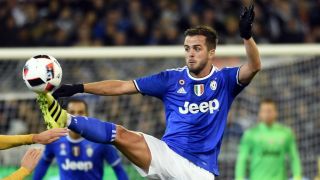 Forget Paul Pogba. The future is bright with Miralem Pjanic at Juventus.

Pogba is an integral piece to the Juventus jigsaw, but an in-demand 23-year-old whose future could be away from Turin.

As Juventus prepare for a tilt at an unprecedented sixth successive Serie A title and an elusive Champions League crown, questions continue to surround star midfielder Pogba, much to the annoyance of championship-winning coach Massimiliano Allegri, who has virtually banned talk of transfers during Juve's International Champions Cup campaign in Melbourne.

Absent from the touring party in Australia following France's run to the Euro 2016 final, Pogba is reportedly on the verge of a return to Manchester United in a record-breaking deal.

It is never easy when facing the prospect of losing a midfielder who provided eight goals and 12 assists last season, however it is not every day you are able to bring in a replacement arguably a more complete player, who recorded the same amount of assists and scored two more goals in 2015-16.

And despite so many factors being at play in a pre-season fixture, Juve are in good hands with Pjanic pulling the strings if Tuesday's debut at the iconic MCG is anything to go by.

After sitting out Juve's opening match against Melbourne Victory on Friday, 26-year-old Bosnia-Herzegovina international Pjanic – wearing the number five shirt – took centre stage and he did not disappoint.

A signing from rivals Roma for a reported fee of €32million in the off-season, Pjanic showed glimpses of his quality on a cold winter's night in Melbourne, having a hand in both first-half goals.

Back on Australian soil for the second time in the space of a year, after scoring a stunning long-range goal for Roma against Manchester City at last year's ICC event, Pjanic hurried an under-strength Tottenham side into an early mistake, gifting man-of-the-match Paulo Dybala an early goal.

Dropping deep and pressing forward, sending inch-perfect passes from left to right, Pjanic then stepped it up a notch, lofting a delightful cross that picked out former Roma team-mate Mehdi Benatia – another recruit this time from Bayern Munich on loan – for the game's second goal in the 14th minute.

Pjanic almost capped a 66-minute outing with a goal early in the second half, though his effort went over the crossbar after beating the offside trap with ease.

So rest assured Juventus fans, the Italian giants are set to challenge in Europe, with or without Pogba.