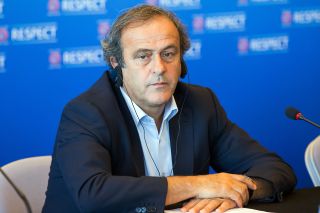 Platini was speaking after FIFA president Sepp Blatter suggested the number of European qualifiers should be reduced.

Thirteen European countries currently compete at the finals, which has featured 32 teams since 1998. However, Platini believes both of those numbers should increase.

"I totally agree with Mr Blatter that we need more African and Asian (countries)," Platini told The Times. "But instead of taking away some European, we have to go to 40 teams in the World Cup.

"We can add two African, two Asiatic, two American, one Oceania and one from Europe. I support this idea totally."

"Football is changing and now we have 209 associations," Platini continued. "There are more countries so why reduce? Forty is not so bad.

"You have three days more of competition and you make more people happy."

The former France international expects his plan to be accepted by the FIFA executive committee when they meet in Brazil next month.

"They will be happy," he added. "Of course they will vote for it.

"It’s not based on the quality of the teams because you don’t have the best 32 at the World Cup.

"The competition is to bring all the people of all the world. If you don’t give the possibility to participate, they don’t improve."