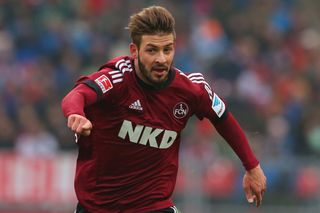 Plattenhardt arrives in the German capital from Nuremberg, after he was unable to keep his first club in the Bundesliga this season.

The 22-year-old defender, who made 31 appearances in the Bundesliga for Nuremberg last season, joins Valentin Stocker, Tolga Cigerci and Jens Hegeler in agreeing moves to the Olympiastadion since the end of the campaign

Hertha managing director Michael Preetz described the full-back as a player with "a lot of potential", and Plattenhardt is looking forward to a new challenge.

"Hertha Berlin for me is the next step in my career," he told the club's official website.

"I am very pleased to be able to contribute my strengths in the coming season for the team."

Plattenhardt has represented Germany at youth levels, and has earned seven Under-21 caps.

He joins a Hertha side that finished 11th in the Bundesliga table last season under Dutch coach Jos Luhukay.