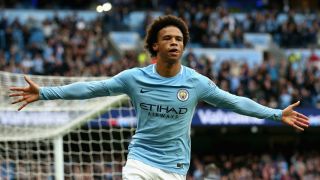 Leroy Sane has revealed the sage advice he received from Pep Guardiola to help ignite his Manchester City career – play like Lionel Messi.

When Sane first arrived from Schalke in 2016, he struggled to make an impact as injuries hindered his transition into the Premier League.

But the 22-year-old has gone on to establish himself at the club, playing a key role in their rise to the top of the table and progress to the last 16 of the Champions League.

And Sane gave an insight into his manager's motivational skills as he explained how Guardiola has got the best out of him following a slow start.

"I needed a little time to settle, to know the Premier League, the people here, how they are and to know the players," he said in quotes reported by The Guardian. "I had to find my confidence.

"Be free like Messi, have fun, do things like he wants from a striker like the end of the space [near goal] – take the option to shoot or give an assist."

20 - Leroy Sane has been directly involved in 20 goals for Manchester City this season (9 goals, 11 assists); the third City player to achieve that feat so far. Spree. 6 January 2018

Guardiola has spoken in glowing terms about Sane's potential and the Germany international is excited to see how far his talent will take him.

He added: "No player at the beginning of his career knows how good he can be. It's exciting and for me it's a challenge to see how good I can be, how I can get to the best level.

"It's really nice to see how it will go.”

Sane's nine goals this season is equal to the tally he achieved in the whole of the last campaign.