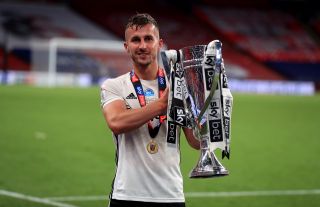 Bryan, scorer of a brace in the Cottagers’ 2-1 Championship play-off final victory over Brentford in August, and Onomah have agreed deals running to the summer of 2023.

For Odoi, the contract runs for the next two years, and in all three cases there is the option for a further 12 months.

Bryan, 26, joined Fulham in the summer of 2018 from Bristol City and has gone on to make 79 appearances.

He told FFCtv: “I’m obviously delighted to commit a couple more years to the club. We’re in the Premier League now so it’s nice to be able to give myself more time to develop and prove myself as a Premier League player.

“We came together as a team last year and it was nice to be able to repay a bit of the faith that the club and supporters have shown in me during my time here, by helping the club back into this league.

“Now it’s about improvement and making the step up again, to try and become an established Premier League team.”

Odoi has played 134 times for the club since the 32-year-old Belgian arrived from Lokeren in 2016.

Odoi said: “I’m happy, as it’s given me this season and next season guaranteed at the club. I’m enjoying my life here, so I’m really happy that I can stay here an extra two years.”

Fulham’s director of football operations Tony Khan said: “Joe has made many great contributions at Fulham, but his greatest contributions were at Wembley Stadium as in spectacular fashion he scored both of our goals in our play-off final win.

“Joe is still a young player and we believe that Joe’s best football is ahead of him, and I’m excited to extend his stay with us.

“Denis has played a big part in both of our promotions in the past few years, and he is a great competitor with a tremendous work ethic so I’m very pleased to extend his contract.

“Josh played a major role in our promotion, he has quickly become part of our Fulham family. I’m thrilled to extend his contract, and we all hope and expect that he’ll continue to contribute to our success in the Premier League.”

Onomah, 23, added: “I’m delighted. It’s always been my dream to play in the Prem properly, and I feel like I have the chance to do that here at Fulham. From the first minute I walked in I felt the love from the players, staff, fans, everyone involved with Fulham Football Club. I’m just going to keep going, this is just the start.”