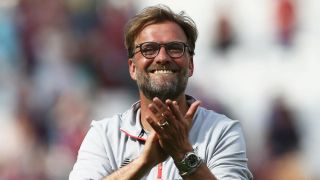 Liverpool manager Jurgen Klopp has spoken to a number of transfer targets and said he noticed an increased desire to play at Anfield following the club's progress this season.

The Reds are in fourth place, one point ahead of Arsenal, as they prepare to face Middlesbrough in their final Premier League game of the season, and Klopp is aiming to guide the club into the Champions League for the first time since 2014-15 by finishing in the top four.

When asked whether the club's reputation had been restored, Klopp told the Telegraph that he had sensed a shift in players' feelings towards Liverpool.

"Everyone can see from outside. The mood is different, a few people are different, but the base is there. It is still the power and size of this club and then the perspective and that has changed.

"We feel it in the talks. They have to see it, they have to feel it and they have to make a decision. The players are really positive this year compared to last year because they have seen our way, our football and that is good."

While Klopp is optimistic about his side's chances of a top-four finish this season, he insisted players wanting to join the Reds in order to play in the Champions League should look elsewhere.

He said: "It should not sound negative but if Champions League is the only reason why a player is coming, it makes no sense for him or for us.

Liverpool have been linked with a number of Europe's top players, including Monaco striker Kylian Mbappe and Roma winger Mohamed Salah, but Klopp warned that large transfer fees would not be spent lightly.

He said: "The world is not full of players who will make us better immediately, but clearly there are a few out there and we have spoken to them."