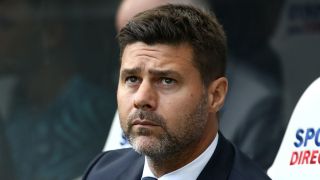 Tottenham need to drastically improve their defending if they are to challenge for the Premier League title, according to manager Mauricio Pochettino.

Spurs' perfect start to the season came to a crashing halt on Sunday as Watford came from behind to secure a 2-1 win at Vicarage Road.

Pochettino's side had taken the lead just after the restart when Abdoulaye Doucoure turned into his own net, but the Hornets surged back and took all three points through headers by Troy Deeney and Craig Cathcart.

The defeat is Tottenham's first of the campaign and brings them back to earth with a bump after their superb 3-0 win over Manchester United on Monday.

Pochettino was left exasperated with his side's defending and is demanding a significant improvement when they return from the two-week international break.

FULL-TIME: A disappointing afternoon at Vicarage Road as we drop our first points of the season after a second-half comeback from the home side. September 2, 2018

"If you want to be a contender and to be on top you cannot concede from this type of action.

"Of course, in every single Premier League game this situation will happen, with any team, and you need to show more strength defending, because that situation is when you really show that you want to win.

"Of course, I'm disappointed with the result, but the reality is clear, this is why we lost.

"I told everyone after the [Manchester United] game that I wasn't happy, and again we try to defend long balls and you need to show that strength, personality, character to play football and defend in the moment.

"I think it is clear from the analysis. It is clear and easy to explain."

The result means Watford have now won their first four games to a league season for just the second time in their history.

A rejuvenated Deeney was a talismanic figure up front for the hosts and boss Javi Gracia was quick to pour praise on the 30-year-old.

When asked about Deeney's ability to motivate the team, he told Match of the Day: "Not only today, always. He has a special personality.

"For us I've already seen and said he is very important. He showed that again but it is no surprise for me."