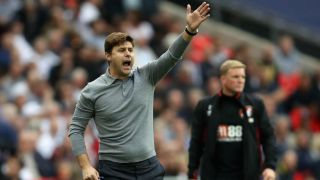 Mauricio Pochettino was pleased to put Tottenham's Wembley woes behind him as they secured a first Premier League victory at the national stadium on Saturday.

Spurs' poor run at their temporary home has been discussed on a consistent basis since the start of the season, with Pochettino's men mustering just two points from their prior three home league matches.

But that run was ended against Bournemouth as Christian Eriksen struck the only goal, and the Tottenham manager is pleased that he will not continue to be asked about the Wembley effect.

Pochettino took no issue with the line of questioning, however, telling Sky Sports: "It is normal. You must ask. If we cannot win here, it is a subject to talk about.

"But I am so pleased that this week - and for the rest of the season - we won't hear that question."

With league leaders Manchester City rampant at the Etihad Stadium against Stoke City, Pochettino conceded this was a game his side had to win.

"I am very pleased, I think it was important," he added. "I think it was a game where we needed to win and take the three points.

"The first half was difficult but, in the end, the performance was enough for the points. [Bournemouth] played so deep in the first half and we made some mistakes.

"It was difficult to find space, but we worked and tried to fix that. We made some changes and we scored at the beginning and then we dominated and created some chances."