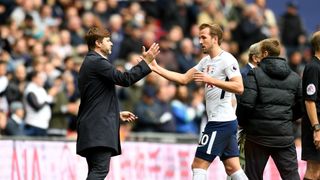 Maurico Pochettino hopes for "understanding" from England over Harry Kane's involvement in the upcoming international break.

Kane has only scored in one of his last five appearances for Spurs and was substituted in the 77th minute of Sunday's 1-0 win over Crystal Palace at Wembley, having taken a heavy knock to the ankle in the first half.

England face friendly matches against Brazil and Germany over the next fortnight, with Tottenham's Dele Alli having already pulled out of the squad due to injury.

A third Spurs player, Harry Winks, suffered an injury at Wembley on Saturday, but Pochettino will not withdraw anyone who is fit to travel, although offered a thinly veiled suggestion for Gareth Southgate to manage his players' workload.

"It's such a difficult situation for everyone," Pochettino told a news conference.

"We are focused on our problems and our interests and for the national team I understand completely what they want and what they need, and for the player too. The most important too maybe.

Sometimes you just got to grind it out. 3 points all that matters. Great finish Sonny. November 5, 2017

"I'm sure that the national teams all understand the situations of our players and they will help them to be fit for their next game here otherwise it will be very tough, with the Christmas period, tough for the players.

"But that is the competition that you can't do too much, only have good communication and a very good relationship with all the national teams and try to explain the situation with everyone and trust that they can manage it in a very good way for the best of the player, the team and the national team."

"Dele Alli against Manchester United he felt in his tendon, in his posterior, close to his hamstring," Pochettino explained.

"Then he played 90 minutes against Real Madrid. It's a very small thing, but was a massive risk today to play.

"We're sure he will be ready for Arsenal. We hope that it's all going well in the next few weeks and will be available [on November 18]."