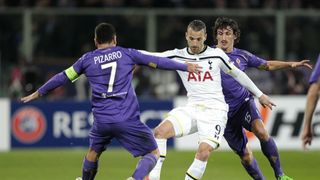 After a 1-1 draw at White Hart Lane, Spurs were downed 2-0 in Florence through Mario Gomez and Mohamed Salah strikes.

However, Soldado - Spurs' first-leg goalscorer - should have put the Premier League side ahead in Florence before the interval when he raced clear one-on-one with Nacer Chadli alongside him.

Possibly caught in two minds, the Spaniard's weak attempt to find his team-mate was easily gathered by Fiorentina goalkeeper Neto.

"We are all disappointed, the player, too," Pochettino said. "It is normal.

"This one was the first final for us and all players are disappointed, but now we need to look forwards, to recover quickly, because on Sunday we have another game [against Chelsea in the League Cup final]. It is impossible to change the game now.

"It is true that it was key, this action. You need some luck to score sometimes if you are to win the games.

"It is true that in the second half we made some mistakes and we take a risk and Fiorentina scored.

"We did not score and, if we want to analyse the game, it is easy: Fiorentina scored, we didn't score and in football when you don't score it is difficult to win games.

"I think they scored more than us and we didn't score. If we analyse the performance, we played very well again but didn't score in the first half.

"You only deserve to go through to the next round if you score and they scored more goals than us."