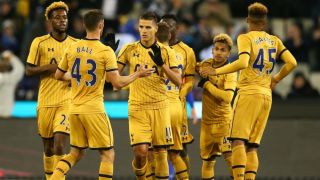 Despite losing to Juventus in Tuesday's International Champions Cup clash, Tottenham head coach Mauricio Pochettino was happy with what he saw.

Paulo Dybala and Medhi Benatia scored in the first half to see Italian champions Juve past their Premier League opponents 2-1 in a pre-season match at the MCG in Melbourne.

Tottenham were far from full strength for the match in Australia, with Ryan Mason leading a squad without the likes of captain Hugo Lloris, Harry Kane, Jan Vertonghen, Toby Alderweireld, Dele Alli, Kyle Walker and Danny Rose, as well as Christian Eriksen, who sat out the match due to illness.

Erik Lamela did look lively, pulling a goal back in the second half, while new recruit Victor Wanyama impressed in midfield.

"It was a very good second half and in the end I'm happy. It's not about the result it's about pre-season," Pochettino said via Tottenham's Twitter account.

"It was a great experience for us – lots of things to learn and lots of positives.

"Our supporters were fantastic. Hopefully they were pleased with the second half and proud of our young players."

New signing and Dutch striker Vincent Janssen made his first public appearance for Tottenham, following a behind-closed-doors friendly in England prior to the trip to Australia.

The 22-year-old added: "It was a real privilege to play my first Tottenham game in public.

"It's a great trip for me - a great week to get to know my team-mates. They've made me feel welcome."