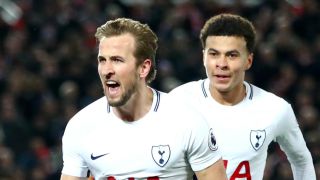 Harry Kane showed he has "big, big balls" in scoring a penalty to reach 100 Premier League goals having previously been denied from the spot at Anfield, according to Tottenham manager Mauricio Pochettino.

Kane struck deep in stoppage time to earn Spurs a 2-2 draw in a pulsating Premier League clash against Liverpool on Sunday, the England forward having earlier hit a spot-kick straight at Loris Karius.

Spurs escaped with a point to boost their Champions League qualification hopes after a pair of controversial penalties helped them fight back from a Mohamed Salah double.

Victor Wanyama's wondergoal contributed to a positive result for Spurs, but it was Kane who grabbed the attention of Pochettino after his latest landmark strike.

"He is one of the best strikers," Pochettino told a post-match press conference.

"He is so calm. To score 100 Premier League goals you need big, big balls."

Speaking to Sky Sports immediately after full-time, Pochettino expanded on his praise for Kane and his side after a battling performance.

"No doubt it's important to congratulate him on 100 Premier League goals, it's fantastic for him," Pochettino said.

"He said thank you to everyone for the help of the team, he was so happy and excited to score 100 Premier League goals.

"I was calm and relaxed. I am a little bit ill, I have a cold, sorry for my voice. But I think it was a great game to see and to watch for everyone. Two teams trying to play exciting football.

"We were better after 90 minutes, much better, deserved to win but that is football. What is important is the character and the performance.

"First half we were better too but we conceded after three minutes. We conceded the first goal but over the 90 minutes we were much better."

A point at Anfield rounded off a topsy-turvy week for Spurs, which included a 1-1 draw at Newport County in the FA Cup and then saw Pochettino's men completely outplay Manchester United in a 2-0 Premier League Wembley win on Wednesday.

"Difficult to speak in a week like this when the team showed what they showed, character and personality in my short history at the club we tried to give our best and always show personality and character," Pochettino added.

"I'm happy, we played for the win and to change the history [of the club], we can only give it time."