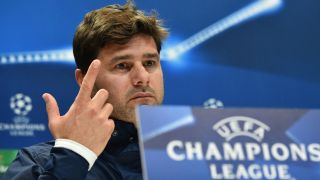 Mauricio Pochettino refused to make excuses for his Tottenham side after they slumped to a disappointing 1-0 Champions League defeat against Bayer Leverkusen at Wembley.

The hosts came close to salvaging a point late on when Eric Dier's free-kick struck the crossbar, but Pochettino was critical of his players' overall performance and denied that being forced to play their home Champions League games at Wembley due to work on a new stadium was a factor behind their two consecutive defeats.

"If we see the stats, it was 50-50 in the chances that we created," he said. "We need to create more and try to score. If you don't score in football, it's difficult to win. In our two games at Wembley, against Monaco and Leverkusen, they were clinical and we weren't and for that we lose the games.

"We were poor. I have nothing to say about Wembley, we were poor. If we analyse the game, we created the same number of chances and had more possession, but the feeling was always that it was difficult to score.

"We don't have the freedom to play and show real quality. After two games at Wembley, both have been poor. It is not an excuse, it is the truth.

"We need to improve and change some things. We are in a bad moment. After Manchester City we don't win and we need to be critical and find answers."

To compound a miserable night for the hosts, they also lost Mousa Dembele to injury during the first half, with Pochettino confirming that the Belgium international had twisted his ankle.

Next on the agenda for Tottenham in the Champions League is a trip to group leaders Monaco on November 22nd.