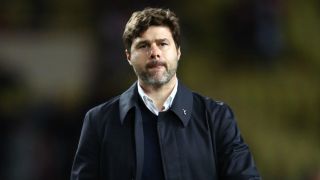 Mauricio Pochettino says Tottenham will continue to play European matches at Wembley should they qualify for the Europa League.

Spurs are unable to reach the knockout stages of the Champions League after losing 2-1 to Monaco on Tuesday, although they can still book a place the Europa League's round of 32 by finishing third in Group E.

Moussa Sissoko, a big-money signing from Newcastle United in August, has suggested fixtures in UEFA's second-tier competition should not take place at the 90,000-seat national stadium, which has been used for Tottenham's Champions League home games as White Hart Lane undergoes redevelopment.

However, speaking to the media before the Premier League trip to Chelsea on Saturday, Pochettino rejected those claims.

"The player needs to focus on playing," he said. "We will play the Europa League in Wembley and we need to make it our home.

"Next season we need to play 19 [league] games and European competition [at Wembley].

"We need to make it our home. Never, never [we will move venues] - we will play in Wembley."

Spurs scored twice in the closing stages to come from behind and seal a dramatic 3-2 win at home to West Ham in the Premier League last weekend.

They face a tough task away to Antonio Conte's league leaders in their next outing, with Pochettino determined to begin putting right the disappointment of an underwhelming Champions League campaign.

"For me, it's a big motivation," he said. "You always want to move forward, not stop and complain or blame.

"Only you can stop to analyse and be calm to assess the team.

"I am looking forward to trying to get more possibilities to play in Wembley and the team can start to feel like home.

"The new stadium is coming - we need to move to Wembley next season and we cannot complain next season. We need to start to avoid all the negative things."

According to the Argentine, Toby Alderweireld has returned to training but will not be fit to face Chelsea, with Erik Lamela and Ben Davies also ruled out of the clash.