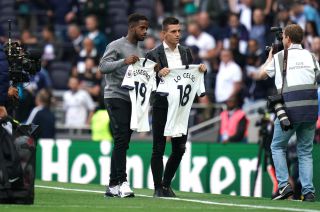 Tottenham will do everything they can to provide Ryan Sessegnon with the platform he needs to flourish, says manager Mauricio Pochettino.

The talented England Under-21 international is fit again after moving to Spurs in August while carrying a hamstring injury.

At Fulham, Sessegnon established himself as one of the brightest prospects in the country, finding the net 15 times in the Championship during the 2017-18 campaign.

While the 19-year-old found the step up to the Premier League more challenging last season, Pochettino is confident he will enjoy success at Tottenham, but called for patience.

Thanks for the warm welcome @SpursOfficial 🙌🏿 Can’t wait to play my first game here 😍It was great to watch the team to a good victory today! #COYS💙 pic.twitter.com/cw7UQWWHWA— Ryan Sessegnon (@RyanSessegnon) August 10, 2019

He said: “You can be a very good player, but you need a platform, team-mates and good coaching staff to help you. Then you need time and luck and training hard and hard work.

“Sometimes the people don’t realise that for a player with talent to have a good career and be successful you need a platform. Tottenham, I hope, will provide that platform.

“It’s the platform provided for Dele Alli, Harry Kane and Harry Winks and different players that were very successful in their moment. I hope that happens with him too because he’s a great talent.”

Tottenham’s interest in Sessegnon charts back to when he made his debut as a 16-year-old in the 2016-17 campaign.

Capable of playing anywhere on the left side – full-back, wing-back or as a winger – the teenager was used in a variety of different positions by Fulham last season.

It perhaps explains why he struggled with the step up, in addition to working with three different managers.

Sessegnon even played as a right winger on occasions, but still managed to score three goals in the Premier League.

After recovering from a hamstring issue, the Londoner will hope to make the Tottenham squad on a matchday for the first time against Crystal Palace on Saturday, but his manager is not yet decided where best to use him given his recent injury lay-off.

Pochettino added: “I cannot tell you. We’ll see. Because Thursday was the first day he was involved with the whole team and still he’s not had one tactical session with us.

“We were six or seven players training in the last week and still I cannot tell if he’s going to play in one or another position. We’re going to assess him and see how he adapts to the new club and new level of football.

Sessegnon will not be the only teenager hoping to make their Tottenham debut this month, after forward Troy Parrott enjoyed a week to remember on international duty.

The academy prospect scored three times for Republic of Ireland Under-21s and was named in the club’s Champions League squad.

But Pochettino said: “I think he needs time, we need to be relaxed. We cannot put his name in the spotlight every day because we’re not going to help him by doing that.

“Sometimes he’ll train with us, good. Now it’s a process where he needs to be relaxed. If we put too much pressure we’re going to force or push him to make a mistake and that’s what we don’t want.”