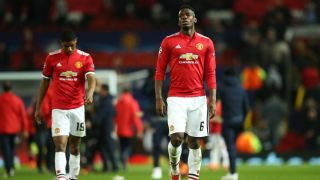 Wales manager Giggs came through United's academy, played for the first team between 1991 and 2014 and previously served as Louis van Gaal's assistant at Old Trafford.

The Red Devils' style of play has come under criticism since Alex Ferguson departed five years ago, and Giggs is keen to see the current crop show the same commitment to entertainment that he did.

"First of all, I was a Manchester United fan," he told ESPN FC. "I used to climb over the fence when I was a seven, eight-year-old, get the match bus to Old Trafford.

"Right from when I can remember, I used to go to Old Trafford and then, fast-forward to 17, 18, I played for the first team. I understand how the club works, what the fans want, because I was a fan.

Giggs also believes a strong core of players steeped in the club's tradition will be crucial as they bid to bring back the glory years that were so memorable under Ferguson.

"Football's changing, but you still have the likes of Rashford, [Jesse] Lingard, Pogba - who was there when he was younger," he added.

"You've got Antonio Valencia, Ashley Young, Michael Carrick's just left, but a group of players who know what the club's about.

"I think it's always important to have that. It doesn't guarantee you success - and if you don't have that it doesn't mean you're not going to win - but it always helps if you do have that sort of team spirit."