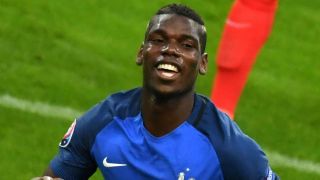 Paul Pogba was delighted to help hosts France into the semi-finals of Euro 2016 but wishes Juventus team-mate Gianluigi Buffon could share in his joy.

Pogba has endured a stop-start tournament to date but towered above the Iceland defence to power home an Antoine Griezmann corner at the Stade de France on Sunday - the second goal in a resounding 5-2 victory for Didier Deschamps men.

France face Germany in Marseille in the last-four on Thursday after the world champions edged past Italy on penalties.

That agonising setback prompted full-time tears from the Azzurri's veteran goalkeeper Buffon and Pogba found it a tough spectacle to watch.

"I am very happy to be in the semi-final, I cannot moan. I am so happy for this," the midfielder said.

"A semi-final is a semi-final, Italy and Germany are equally tough.

"Either way, we want to continue so we want to win and both are great sides.

"To see Gigi crying made me feel very bad sitting in front of the television.

"He is a great goalkeeper, he gave his best and so did the team. They produced a very good game, but this is football."

Fellow Juventus players Giorgio Chiellini, Andrea Barzagli and Leonardo Bonucci also starred in defence for Italy, with Bonucci equalising from the spot against Germany in Bordeaux before agonisingly missing during the shoot-out.

"They have had a fantastic Euros, nobody expected such a great Italian team," Pogba added. "I'm not happy with what happened for them. I am truly a player who plays with them so I am proud when they play well."