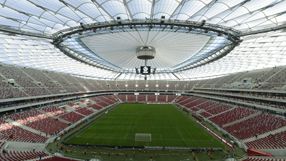 Football's world governing body FIFA ordered that the match originally scheduled for Oct. 16 should be played the next day after it was called off when rain in Warsaw turned the National Stadium pitch into what some called the "National Pool".

Earlier on Wednesday, Sports Minister Anna Mucha said she was ready to resign if needed because she felt politically responsible for the controversy surrounding the $550 million stadium built for Euro 2012.

"I deem accepting of the resignation as unjustified," Prime Minister Donald Tusk told a news conference. "There were too many hosts and nobody accepted the responsibility to take a final decision... there was a lack of imagination."

Tusk said the roof over the 58,000 capacity arena could not be closed during rainfall due to safety concerns.

Neither the teams nor FIFA wanted to close it when there was still time. But the arena owner, National Sports Centre (NSC), which is overseen by the Sports Ministry, should have been more insistent given the dire consequences of keeping the roof open.

Tusk said he wanted Mucha to tighten her grip over the NSC.

Local media reported the pitch was not as heavy as the one used for Euro 2012 matches, making it less able to absorb the heavy rainfall but Tusk rejected this as a significant factor.

The Group H game ended in a 1-1 draw but both managers lamented the effects the postponement had on their players.

Thousands of angry England fans complained they were unable to attend the rescheduled game because they could not afford to stay longer in Warsaw and reschedule their tickets home.

"I suffered as every other fan that evening," said Tusk, a passionate football enthusiast who still plays the game regularly.

The rescheduled match was played under the roof despite sunny weather and mostly clear skies.