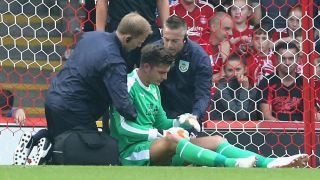 Pope was withdrawn after just 14 minutes at Pittodrie, receiving a knock to his shoulder and forcing Dyche to send on Anders Lindegaard in his place.

Lindegaard was on the field for just five minutes before Gary Mackay-Steven gave Aberdeen the lead from the penalty spot, but Sam Vokes rescued Burnley with a goal 10 minutes from time to level the tie at 1-1 going into the second leg.

Dyche gave a negative assessment of Pope's injury, saying: "We are waiting to find out more news.

"Nick has gone to hospital with an injury to his shoulder and it certainly looks more serious than not serious at this stage, so we are really disappointed in that.

PIC: Nick Pope is helped off after suffering an injury early in the game July 26, 2018

"It was a bit of a needless challenge when Nick looked like he was just going to catch it, and then [after the ball lands] I think it's the second challenge.

"When he responds to stop the ball going in I think the lad has caught his arm and knocked it back, so we'll just have to wait and see."

The news is a particular blow to Burnley given Tom Heaton is yet to return to action following the dislocated shoulder he suffered last September.

They host Aberdeen at Turf Moor next Thursday and begin their Premier League campaign against Southampton on August 12.