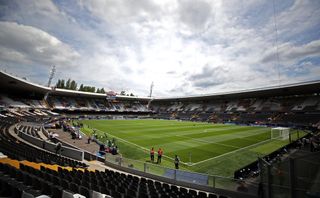 Porto striker Moussa Marega has hit out at the “idiots” who allegedly racially abused him after his goal at Vitoria Guimaraes on Sunday – and at the officials for not “defending” him.

The 28-year-old Mali forward scored what turned out to be the winner on the hour mark in the Primeira Liga clash against his former club, and celebrated by pointing to his forearm.

This seemingly led to the home fans making monkey chants and throwing chairs at the player.

Marega attempted to make a stand by leaving the pitch, gesturing to the home fans en route. He was restrained by team-mates and opposition players but eventually got his way and left the action.

After the match he took to Instagram to hit out at the guilty parties, and at the officials for booking him rather than helping the situation.

He posted: “I would just like to tell these idiots who come to the stadium to make racist screams… go f*** yourself. And I also thank the referees for not defending me and for giving me a yellow card because I defend my skin colour. I hope I never meet you on a football field again! YOU ARE A SHAME!!!!”

Porto head coach Sergio Conceicao tweeted after the game to say: “We are all Moussa #notoracism.”

The club also issued a statement strongly backing their player in the fight against racism.

It read: “Following the abuse suffered by the player Moussa Marega during the Vitoria Guimaraes v Porto game, Porto announce that:

“1. The entire structure of Porto and its supporters are in solidarity with Moussa Marega, who was led to take drastic action in the wake of repeated racist insults.

“2. Porto strongly condemns racist behaviour this afternoon, which is one of the low moments in the recent history of Portuguese football and will have to be properly penalised.

“3. Porto will remain at the forefront of the fight against racism and hate crimes, and its team maintains the will to continue fighting them on the field.”