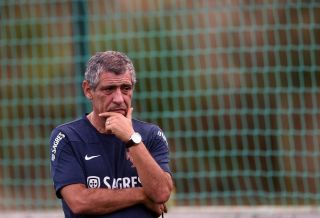 The former Greece boss was banned for eight competitive games after abusing match officials at the World Cup in Brazil.

But the suspension could be temporarily lifted if the Court of Arbitration for Sport decide to grand him an appeal hearing on Monday.

Santos said it was unlikely he would be on the bench for the Euro 2016 qualifier, but he will definitely be on the sidelines when his side face France on Saturday.

"Independently, whether I'm on the bench or not, my contribution will be the same for tomorrow and Tuesday.

"What matters is our philosophy about the game, our game strategy and what we want the team do during the game."

Portugal have been overly reliant on Real Madrid star Cristiano Ronaldo in the past few years.

Santos, who replaced the sacked Paulo Bento in September, said he expected the attacker to be professional and show his desire to win.

"Cristiano means to Portugal the same as what he means to the world. He is considered to be the best football player in the world," Santos said.

"We are very proud of him, not just the Portugal team, but all Portuguese people are very proud to have the best player of the world in our team. So, obviously, we consider that.

"What to expect from him? We expect that he can show how professional he is and bring to the team his amazing ambition to win.

"With all he has, I expect he will give to us all the good things he has already given to us in the past. Because Cristiano has knowledge about global competition.

"What we expect is not more or less than what everyone expects."