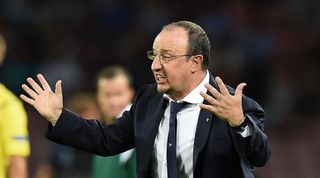 The two sides meet at San Siro on Sunday with only two points separating them in the table, with Napoli the in-form team prior to the international break.

After two defeats in their opening three league matches Napoli have hit their stride in recent weeks with victories over Sassuolo and Torino in the top flight, and versus Slovan Bratislava in the UEFA Europa League.

And Benitez is eager to see his side continue their purple patch.

"Our mentality at the moment is positive and if we win a fourth game on the trot it would be very important for us," the Spaniard said.

"Even though we are away from home, we will try to get the victory. It's beyond doubt Inter have pressure on them.

"At the moment we are confident and if we win it will grow even more. This team can fight it out with anyone, then as time goes on the strength in depth will also be decisive.

"I take it one game at a time and don't think of final objectives like the Scudetto. If we win tomorrow, it'll be easier to win the next match too."

Inter come into the match on the back of two league defeats, with pressure beginning to build on head coach Walter Mazzarri as leaders Juventus have already moved 10 points clear of his side.