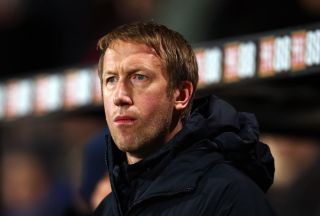 Graham Potter believes Brighton’s comeback draw against West Ham was a demonstration of the character that they will require to secure Premier League survival.

Pascal Gross and Glenn Murray struck late as Brighton battled back from 3-1 down to snatch a 3-3 draw last weekend.

The Seagulls are without a win this year, but Potter was encouraged by what he saw from his side at the London Stadium ahead of their clash with fellow strugglers Watford.

Potter said: “It (the West Ham game) was a good point for us in terms of how we got the point.

“We’re a little disappointed not to get the three, but to come back twice in the Premier League is a character and a determination that I think you need to show as well.

“We need to improve our points tally – that’s quite fair, and obviously we’re focusing on that for the weekend.”

Watford spent the majority of the season at the foot of the table but have improved in recent weeks under Nigel Pearson, who has taken them from bottom to just two points from safety since replacing Quique Sanchez Flores in early December.

Potter started his career as Brighton manager with a 3-0 win over Javi Gracia’s Hornets in the first match of the season, but expects a different challenge against Pearson’s men.

“Nigel has come in and steadied the ship and made use of the quality which is there – don’t forget this is a team which finished in the top half of the Premier League last year, FA Cup finalists,” Potter added.

“So when you look through their side and you look at the players they have, they’ve got good players and good quality so we know it’s a tough game.”

“I just focus on us,” Potter said.

“It’s not going to give me any comfort looking at the league table and deciding who’s in it (the relegation fight) and who’s not, we just have to focus on ourselves.

“We just have to focus on the next game, try to take the good things that we’ve done in the game, take out the things we didn’t do so well and take the three points that we all would like.”