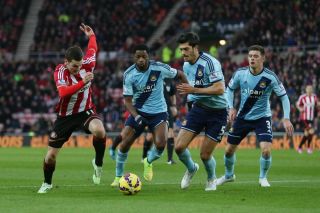 Jordi Gomez handed Sunderland a 22nd-minute lead from the penalty spot at the Stadium of Light on Saturday, with West Ham boss Sam Allardyce furious to see James Tomkins punished for a challenge on Johnson where contact appeared minimal.

Poyet accepted that Johnson might have been fortunate to win the verdict from referee Phil Dowd, but pointed to a second-half call when West Ham defender Winston Reid got the benefit of the doubt as he was the subject of strong handball appeals on the end of Santiago Vergini's cross.

Responding to Allardyce’s post-match ire, Poyet said: "Have his players never dived? The second one was a definite penalty and a manager can be more honest sometimes.

"Sometimes you get it and sometimes it is against you.

"I thought it [the Johnson decision] was a bit harsh. I didn't think it was a penalty but I don't think he dived.

"The defender was in front of him and he was stronger and bigger and when the referee gives the penalty you are not going to say no to it."

Stewart Downing scored before the half-hour mark to ultimately secure a share of the spoils for West Ham, but Sunderland appeared set to regain the lead just before the break, only for Jozy Altidore to somehow complete a horror miss with the goal gaping.

Poyet conceded that the United States international forward, who has a solitary goal in 41 Premier League appearances for Sunderland, was at a low ebb confidence-wise.

But he challenged him to make a mark on next Sunday's Tyne-Wear derby against Newcastle United and during the busy festive period.

"I have never seen Jozy like that," Poyet said of the player's demeanour after the miss.

"But we've got a long week and a great game to play next week and if we win that nobody will remember today or the miss or whatever we have done in a different way.

"If Jozy had scored you would have said it was a great decision to play him. I tried to say him at half-time to look for the net and don't keep thinking about that, but he needs a goal."