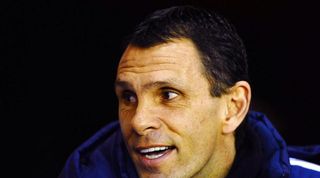 The Uruguayan witnessed his charges draw a blank for a second friendly match running in Saturday's 0-0 draw with Vitoria Setubal.

Poyet last week revealed his wish to add at least four players to his first-team squad and his priority is to bring in a goal threat, though he refused to confirm whether Liverpool's Fabio Borini would be among his new captures.

When asked about the Italian, Poyet responded in quotes reported by the Sunderland Echo: "You'll know in two or three days."

"I'm really looking forward to seeing the final touches with the players we bring in to make sure we have a competitive squad.

"It's quality sometimes, the different ability that you need in the last third, more players, everything really.

"But it is clear that we need to score more."

Cardiff City midfielder Jordon Mutch is reported to be on Poyet's radar, but he would not be drawn on that subject.