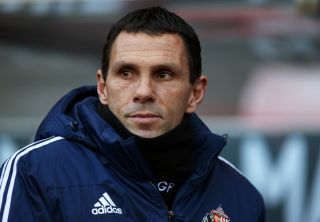 The Premier League's bottom club produced a stirring fightback as a Steven Fletcher strike and a 95th-minute goal from Jack Colback earned a point for the visitors after Jordon Mutch and Fraizer Campbell had seemingly put Cardiff in command.

However, there is some concern over on-loan Liverpool striker Borini, who was replaced by Fletcher on Saturday after reportedly collapsing during the interval.

Borini had felt unwell in the build-up to the game and Poyet has since allayed fears over the 22-year-old by revealing he has now been released following his precautionary trip to hospital.

"He was feeling very bad before the game," Poyet told Sky Sports.

"To make sure that everything is all right, we took him to the hospital. Let's hope it is nothing."