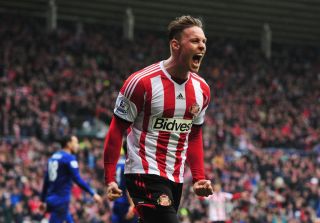 The England Under-21 striker had spells out on loan at Championship outfits Sheffield Wednesday and Leeds United earlier this season, but was recalled in March as Poyet sought to provide a spark to his squad.

The decision has proved to be a sound one, Wickham netting five goals in his past three appearances to help Poyet's men take seven points from games against Manchester City, Chelsea and Cardiff City.

In the latest of those matches, Sunday's 4-0 hammering of Cardiff, Wickham scored a brace of headers as Sunderland moved out of the relegation zone, above Norwich City on goal difference.

Poyet was full of praise for Wickham, and believes the striker could be the catalyst for securing the strugglers' safety.

"I said the team needed a shock, it is Connor, simple as that," he said.

"Today he scored two headers which is so important for a striker of his size.

"The first header, that technical action is (from) the top, top level, it's outstanding."