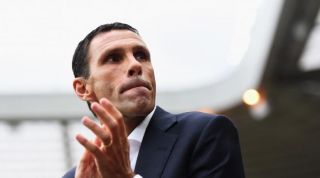 After avoiding relegation from the Premier League last season, Sunderland have so far brought in seven players, including Jack Rodwell, Patrick van Aanholt and Jordi Gomez.

Just three of those arrivals featured at Loftus Road as Charlie Austin's goal on the stroke of half-time got the London club off the mark for the season.

Having chased the signing of Fabio Borini for much of the transfer window, while seeing Ricky Alvarez and Toby Alderweireld linked to the Stadium of Light, Poyet is set to delve into the market before Monday's deadline.

"This is not my squad," he said. "We don't have enough [players]. We know the numbers I wanted to work with and the numbers we've got.

"I will be on the phone all the time [until the window closes]. It's supposed to be a day off tomorrow but it's not going to be.

"I'm not a fan of the transfer window being open during the season, but I'm not going to complain. It's the same for everyone."

Saturday's defeat at QPR came as a disappointing blow to Poyet, who is adamant that the better side lost.

The Uruguayan suggested that "overconfidence" may have played a role from Sunderland's perspective, but he also conceded that QPR's unpredictability may have partly to blame.

"I will watch the game again," he added.  "I don't know if it was overconfidence or whether we were so happy and controlling the game that we thought it was maybe a little too easy.

"It's a good wake-up call because it is not easy in the Premier League. It is difficult.

"If you lose control and momentum and the home team reacts, you have problems.

"I played our normal team and didn't make changes because I didn't have a clue what system they would play, so we went back to basics.

"It worked during the first 30 minutes, then we took a few risks at the end because they were just defending.

"At the end of the day if we had come back into the game then people would have agreed that we deserved it. But goals are expensive and they make the difference."