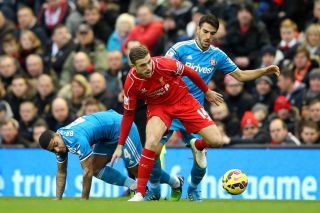 Bridcutt made only his second Premier League start of the season in Sunderland's 0-0 draw at Anfield on Saturday, with the midfielder taking Cattermole's place.

Poyet's decision to rest the in-form Cattermole puzzled some considering Sunderland's slender advantage over those in the bottom three, though Bridcutt put in an energetic performance in front of the back four.

And, although Poyet was impressed by Bridcutt, he did not seem particularly enthused about the possibility of playing him in tandem with Cattermole.

The Uruguayan said: "I think, more than having a difficult time settling in, it was more about having Lee Cattermole in an incredible situation, performing at a high level and making it very difficult for him to play.

"He [Bridcutt] knows that role to perfection, the things we need from a defensive midfielder and I think he showed plenty of actions and that he can play week-in week-out.

"Now they will fight for that place. Can they play together? I don't know. We'll see.

"I didn't play them together against Chelsea, Manchester City or Liverpool, so it looks difficult.

"But for the team it is good to know that they will do the right things in terms of defending in front of the back four.

"I'm pleased for him, he has been waiting. He played one game against Everton and did very well, then back to the bench. Now he had a chance to play, so I'm delighted for him."