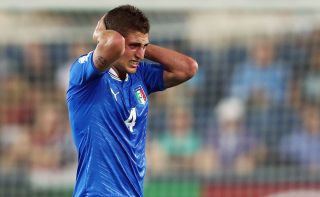 The 20-year-old is yet to feature in the qualifying fixtures for Brazil 2014, but with Italy having already won Group B in the European section with two matches left, Verratti could now get his chance to impress.

The youngster has caught Prandelli's eye after an impressive period with reigning Ligue 1 champions Paris Saint-Germain since joining last year, with the midfielder starting 23 matches in their title-winning campaign.

And the boss is now eager for the former Pescara man to prove his worth on the international stage.

"Marco can play not only in front of the defence but also as an 'interno', further up the field." Prandelli said.

"Marco had a terrific first season at PSG and now we look at him differently, he's no longer a youngster and he must be a player who adds something to a team."