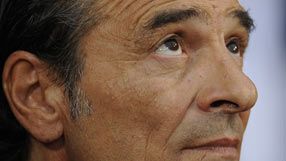 The trio of Amauri, Antonio Cassano and Mario Balotelli linked up in Prandelli's first game, the August friendly loss to Ivory Coast, but ever since at least one of them has been injured.

This time Prandelli has left out Cassano, impressive on his return to the Azzurri during their Euro 2012 qualifiers, after the forward was suspended by club Sampdoria for swearing at the president and refusing to attend an awards dinner.

"I will not abandon Cassano but he must resolve his problems with Samp," Prandelli told reporters amid speculation that the striker might even quit the game if Samp forced him out after an arbitration hearing.

Brazil-born Juventus striker Amauri has struggled for full fitness since the Ivory Coast game so has been overlooked but Manchester City's Balotelli is back despite serving a ban after a red card for kicking out against West Bromwich Albion.

"I was there when he was sent off, it wasn't violent. It was a normal thing, a committed player in a committed match," added Prandelli, who has called up four new players including Argentina-born midfielder Cristian Ledesma.

A new front line of Balotelli, Alberto Gilardino and Giuseppe Rossi looks the most likely for the game, bizarrely being played in Klagenfurt in Austria for commercial reasons.

Romania, struggling in fifth in Euro 2012 Group D in contrast to Italy who top Group C, also have problems upfront with Adrian Mutu missing having just returned from a drugs ban.

The striker, who plays his club football in Italy with Fiorentina, has a groin problem.

Romania's next qualifier is the March 26 game in Bosnia, after they lost their last game 2-0 in France.

Italy's previous encounter was the abandoned qualifier with Serbia which resulted in a 3-0 walkover win for the Azzurri because of crowd violence. Their next qualifier is in Slovenia on March 25.