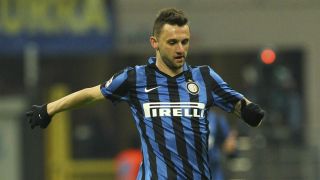 Brozovic is on a two-year loan spell at San Siro from Dinamo Zagreb, with the Serie A side having a conditional obligation to buy him.

The 23-year-old, who has made 29 league appearances since arriving in January 2015, has been linked with a move to Arsenal, even though Inter coach Roberto Mancini insisted last week his club have no intention of allowing the player to leave.

The Croatia international's representative has claimed there are English sides in the hunt for his client, but stressed Inter remain in the driving seat to determine his future.

"Last week I was in England, but I promised I would not reveal the names of the interested clubs. If Inter give their consent for a transfer I will be the first to hear about it.

"His potential is very high and he is improving more and more. We hope to continue like this, and play the biggest games in 2016, as well as scoring lots of goals.

"Could he leave in January? That depends on the transfer market and the various interested clubs. In the end, though, Inter will decide his fate.

"But Marcelo is only focused on Inter's season and thinking about how to win the matches ahead."