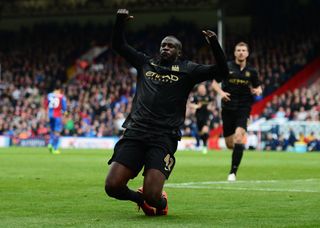 Manuel Pellegrini's men sit third in the top flight, three points behind leaders Liverpool, but triumphs in their three remaining fixtures would almost certainly be enough to secure glory after the Anfield outfit lost to Chelsea earlier in the day.

The 2011-12 champions, who hold a game in hand over Liverpool and a significantly superior goal difference, wasted no time in making the Merseysiders pay for their earlier slip-up – Edin Dzeko heading City in front at Selhurst Park with the game less than four minutes old.

The remainder of the first half passed by largely without incident, until Yaya Toure - making his return from injury - curled home a wonderful effort just before the interval.

Defeat brings an end to Palace's remarkable five-match winning run, while City's title tilt is well and truly back on track with games against Everton, Aston Villa and West Ham to come.

Palace's stay in the top-flight looked set to be nothing more than a brief cameo for much of the campaign, but their resurgence under Tony Pulis has seen them emerge as major protagonists in a season of twists and turns at both ends of the table.

However, City started Sunday's game in confident mood and swiftly moved ahead after bursting out of the blocks in south London.

With Pellegrini's charges clearly galvanised by Liverpool's earlier defeat, Toure sent a delightful chip into the Palace area, which Dzeko nodded home for his fifth goal in his last eight league appearances.

City initially struggled to build on their early breakthrough and rarely threatened Julian Speroni's goal prior to Toure seeing an effort blocked by Scott Dann in the box, with referee Howard Webb waving away appeals for handball.

Toure appeared in sensational form after shaking off a thigh problem, and extended his side's lead two minutes before the break.

After exchanging passes with Samir Nasri, Toure forced his way into the area before showing great composure to curl the ball around Speroni.

Palace made the early running in the second period and the in-form Jason Puncheon forced Joe Hart to punch an effort around his right-hand post.

Toure, instrumental to everything that was good about City's performance, was withdrawn after 65 minutes on his return, to be replaced by Fernandinho.

Yet the visitors remained in control and could have moved three up when Speroni reacted well to keep out a deflected Dzeko strike.

Neither side were able to find the net as the game drew to a close, but results at Selhurst Park - where Chelsea were beaten last month -  could well prove pivotal in the destination of the Premier League trophy, and it is leaders Liverpool who face a visit to Palace a week on Monday.