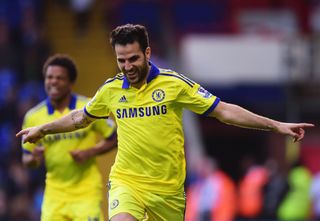 Oscar gave the visitors a sixth-minute lead thanks to a stunning free-kick but tempers boiled over as Chelsea defender Cesar Azpilicueta and his Palace counterpart Damien Delaney received red cards within three minutes of each other in a feisty conclusion to the opening period.

Loic Remy made a first league start for Chelsea as Diego Costa was ruled out by his troublesome hamstring, while Delaney was given the task of shackling the French striker with Palace centre-back Scott Dann sidelined.

The hosts had an early chance as Campbell raced on to Joel Ward's searching pass, but goalkeeper Thibaut Courtois raced out to block before Chelsea opened the scoring in memorable fashion.

Delaney clumsily fouled Willian on the edge of the penalty area, leaving Oscar to devilishly whip beyond Julian Speroni into the top left corner.

Gary Cahill endured a torrid opening at Campell's hands and the striker prodded onto the roof of the net in the 12th minute before beating his man to drag wide left footed.

Jason Puncheon tested Courtois with a stinging shot ahead of the first-half's tempestuous final five minutes.

Azpilicueta received a 40th-minute red card for a rash lunge on Mile Jedinak - Campbell and Fabregas might have joined him off the field but were only booked for their clash in the ensuing melee.

It was 10-a-side just three minutes later as Delaney, already booked for fouling Remy, pulled back Willian and remonstrated with referee Craig Pawson for good measure.

Following his involvement in the unsavoury scenes before half-time, Fabregas demonstrated his technical brilliance in extending Chelsea's lead after 51 minutes.

The Spain midfielder exchanged passes with Eden Hazard and Oscar in a sumptuous display of one-touch football before slotting past Speroni at his near post.

Palace had switched Martin Kelly to centre-half from right-back in Delaney's absence and the former Liverpool man slid in to stop Hazard converting Fabregas' low 61st-minute cross - the Belgian playmaker subsequently flashing a shot past the post with 16 minutes remaining.

Cahill emulated Kelly with a last-ditch challenge to thwart Yannick Bolasie before substitute Zaha handed Campbell a simple 90th-minute finish, but Palace, who made Selhurst Park such a fortress in their stirring escape from relegation trouble last season, have now won just once in five outings at home this term.