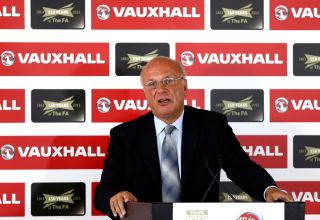 The newly appointed Dyke has previously targeted a FIFA World Cup victory in 2022 for England and has instigated a committee aimed at lifting the flagging fortunes of the national team.

Dyke, who also announced on Wednesday that former England manager Glenn Hoddle will be involved in the process, said that he disagreed with the Premier League's refusal to take part, but that he understood.

Speaking at the Leaders in Football Conference at Stamford Bridge, Dyke said: "The Premier League didn't want to be on it.

"They were very helpful and will help all they can but didn't want to be on the commission itself. I disagree but I can understand why."

Dyke confirmed the commission is being established to help youngsters make the grade in England and that a host of other football figures would be involved, while clubs and leagues would be quizzed as they search for answers.

"I think there is a big issue about the number of English players playing here and the barriers stopping local kids getting into the first teams of their local clubs," he said.

"The FA system is being revolutionised at the moment. Most people think we need more qualified coaches teaching us to play a particular way. The hardest bit will be how we go about and do it. I am not a politician. I won't make the mistake of thinking that when I say something that is it done.

"I don't know the solutions. That's why I want a commission. There are lots of ideas, I'm not sure we know what the solution is. We have two responsibilities, we will be judged by the success of England but we also have a responsibility to ensure kids with talent are getting through and not lost.

"We will be sitting down and talking to the clubs, to the Premier League and the Football League, can you create pathways through for the kids?"

Dyke also admitted he found the decision not to take retrospective action against Chelsea striker Fernando Torres was "baffling".

Under FA rules, a panel of judges were not able to punish Torres despite the Spaniard being caught on television footage scratching the face of Tottenham defender Jan Vertonghen in a 1-1 Premier League draw last month.

"Despite the action taken in the summer to change the rules, they clearly weren't changed enough," he said.

"It is understandably baffling to everyone and must be addressed. As FA chairman I don't like being in a position where I can't explain why we can't take action."