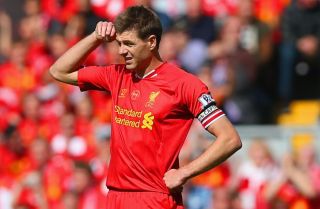 While attempting to control a pass from Mamadou Sakho in first-half stoppage time, the Liverpool captain lost his footing and his slip allowed Demba Ba to burst clear on goal and guide the ball beyond the onrushing Simon Mignolet from 18 yards.

The hosts, whose attacking prowess had been integral to an 11-match winning run prior to this game, were unable to find a reply and Willian added a late second for Chelsea after he and fellow substitute Fernando Torres had been left two-on-one with Mignolet.

Liverpool are now just two points clear of Chelsea at the top of the table, while the result also provides a huge boost to third-placed Manchester City's hopes of catching Brendan Rodgers' side.

Much was made before the game of Jose Mourinho's team selection three days ahead of the second leg of Chelsea's UEFA Champions League semi-final against Atletico Madrid.

The Portuguese had hinted at fielding a weakened side and did just that on Sunday, leaving Gary Cahill and Willian on the bench and handing a Premier League debut to 20-year-old defender Tomas Kalas.

With Frank Lampard, John Obi Mikel and Nemanja Matic - all unavailable for the game with Atletico - screening the back four, Chelsea were set up with the objective of frustrating their opponents and the gameplan worked perfectly as Liverpool struggled to create any clear-cut opportunities, despite enjoying a greater share of possession.

As a result, the leaders drew a blank for the first time in 26 league games and were condemned to their maiden top-flight defeat in 2014, having last been beaten in December's reverse meeting with Chelsea.

Ashley Cole fired an early warning shot for the visitors in the sixth minute, with a fizzing 25-yard effort that Mignolet parried away low to his left, while Philippe Coutinho volleyed into the side-netting from a tight angle at the other end.

Cole was involved again in the 14th minute, this time clearing off the line after the ball had ricocheted off Mikel, before Sakho scooped Luis Suarez's driven ball over the crossbar from six yards out.

The hosts continued to enjoy the greater share of possession and Suarez curled an effort a yard over the bar from the edge of the box four minutes before the interval.

For all Liverpool's dominance, they fell behind in the third minute of stoppage time at the end of the first half.

Moments after Kalas had glanced a free header wide from a corner, Gerrard's slip allowed Ba to race clear and the Senegalese striker kept his cool to slot underneath Mignolet.

Liverpool tested Mark Schwarzer for the first time in the 59th minute, the Australian getting down low to his left to keep out Joe Allen's first-time volley from just outside the area.

Andre Schurrle brought a similar stop out of Mignolet three minutes later, while Gerrard saw an effort from distance comfortably held by Schwarzer.

Liverpool continued to press hard for an equaliser, Schwarzer tipping Suarez's rasping drive over the bar in stoppage time, but as the hosts pushed on they were left exposed at the back and Willian had the simple task of finding an empty net after Torres' unselfish square ball.