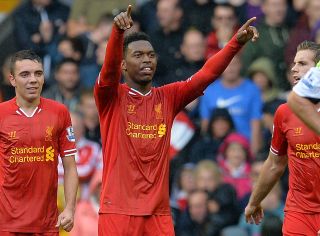 With suspended striker Luis Suarez in attendance, Daniel Sturridge gave the hosts the lead just before half-time, having seen an earlier effort disallowed for offside.

Liverpool kept the pressure on in the second half, but they found Asmir Begovic in superb form, ensuring that the nerves among the home fans would remained frayed.

A penalty in the dying stages looked to have denied Liverpool the win, but debutant Simon Mignolet dived low to his right to claw away Jon Walters' effort.

The hosts largely dominated proceedings early on, but Stoke went close to taking the lead in the eighth minute as Mignolet flapped at a cross under pressure from Peter Crouch. However, Robert Huth lashed his volley onto the crossbar after latching on to the loose ball.

But Rodgers' side reasserted their dominance and had the ball in the net just three minutes later as Sturridge headed home, only to be denied by the offside flag.

Toure then hit the crossbar from Steven Gerrard's outswinging corner, with Sturridge blazing the loose ball over before the England man rounded Begovic in the box but, with the angle too narrow to shoot, he saw his clever ball across goal acrobatically cleared by Pieters.

Begovic then had to be alert, rushing off his line to deny Jose Enrique and Jordan Henderson in quick succession, before palming away Sturridge's fierce right-footed drive.

But the Bosnian was helpless in the 37th minute as the former Chelsea man finally grabbed the first goal of the 2013-14 Premier League season.

After he had picked the ball up 25 yards out from Henderson's pass, the Stoke defence failed to close Sturridge down and he lashed a low effort across Begovic into the right-hand corner.

Stoke were unlucky to go in behind at the break, with Mignolet palming Walters' fierce drive wide and Lucas forced to clear a Ryan Shawcross header off the line.

Coutinho was at the heart of everything as the hosts pushed for a second after the break, first curling wide before cutting down the left and squaring for Sturridge, whose scuff fell kindly for Henderson, but Begovic produced another superb stop, stretching to his right.

Begovic was again called upon to save Sturridge's near-post effort before getting fingertips to Henderson's lashed effort, diverting the ball onto the inside of the post.

Gerrard smashed a free-kick towards the top corner with 10 minutes to go, but it was not good enough to get past the fabulous Begovic.

Begovic's good work was almost rewarded with a point with time running out as Daniel Agger handled Charlie Adam's free-kick in the area, with Martin Atkinson given no choice but to award the penalty.

However, Mignolet proved to be the hero as he kept Walters' effort out and reacted smartly to save Kenwyne Jones' follow-up with his feet and win the game for Liverpool.